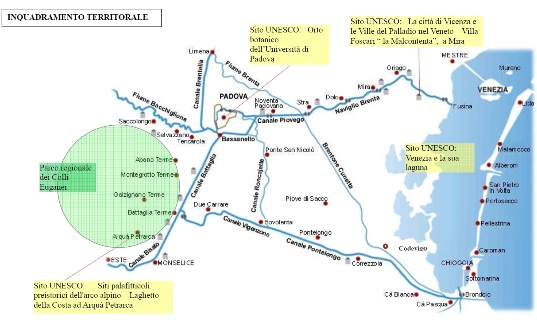 “The Unesco World Heritage Sites Network in the Central and Eastern Veneto, and further itineraries of excellence on the historical waterways, crossing in the Padova area between the Euganean Hills and the Venice Lagoon.”

Visitors of Expo 2015 with a fondness for history and wilderness may wish to make an exciting sightseeing tour to the Unesco World Heritage Sites in Central and Eastern Veneto. Veneto is well connected to Milano by road (motorway A4 Milano-Padova-Venezia), by trains (Milano,Padova, Venezia) and by airplane (Milano-Venezia).

Undoubtedly, being the ultimate attraction the Region, Venice and its art treasures count for the majority of international arrivals. However, not far from Venice, deep in the mainland, lies the City of Padova, one of Unesco’s most treasured pearls.

Because of their common background, connections between Padova and Venice find their roots in the history of the Republic of Venice, on the one hand, and in the morphological features of the land, on the other. The abundance of waterways has helped make cities spreading out between the Padova and the Venice Lagoon quite accessible.

Following the lead of the historical connections between Padova and Venice, the Province of Padova’s project specifically develops the concept of Unesco’s World Heritage Sites Network. The project focuses on the sites located between these two large urban areas, a territory stretching from the Euganean Hills to the Venice Lagoon. All Unesco’s sites can be visited within a span of time and, being water the main subject of Venice to Expo 2015, they can be reached by traditional means of transportation, such as by waterways and bicycle paths that cross valuable historical and natural environments.

The sites are listed as follows:

The project consists in a digital communication campaign promoting the opportunities for the tourism industry offered by the Unesco Sites presence in the same area.

Four bicycle and water tours, all of them starting from Padova, will be available to tourists who want to reach the renowned City centre of Venice and its Lagoon.